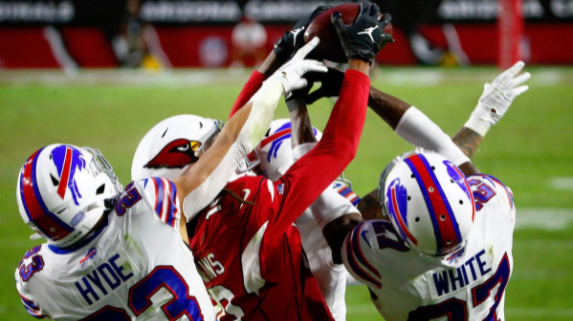 Arizona’s Deandre Hopkins makes a catch in traffic against Buffalo to win the game.

With week seven of the NFL season approaching, there is a lot to look forward to at the mid-way point of the season. The seventh week consists of matchups that will be very important to consider as far as the post-season goes.

The main focus up until this point has been on the success of the Arizona Cardinals. The Cardinals have had an outstanding start to the season, being the only undefeated team remaining throughout the league. This comes as a surprise to many people, considering the last time that the Cardinals have had a 6-0 start to the season was over 40 years ago, in 1974. After defeating some of the league’s top teams, like the Chiefs and the Titans, the Cardinals are believed to have a bright future ahead of them. The Cardinals are the favorite for this week’s matchup as well, facing off against the Houston Texans, hoping to extend their undefeated start to 7-0.

Although the Cardinals are the only undefeated team remaining this season, other teams are considered Superbowl hopefuls with their records of 5-1. The Baltimore Ravens, Dallas Cowboys, Tennessee Titans, Green Bay Packers, and Tampa Bay Buccaneers are among the teams that are having a nearly perfect start to the season, trailing right behind Arizona.

Postseason predictions are very unreliable this early into the season, but the success that is seen in the future for some NFL teams can be understood through their current records. Nonetheless, every team this far into the season has a great chance to be able to prove themselves and make a statement for themselves.